The SuperTux team is excited to announce the availability of the stable release 0.6.0 after almost two years of development.

Note: If you’ve previously used torches in your levels and their positioning is off, please re-position them. We had to re-align their bounding boxes in order to fix bugs with their flame.

If you’d like to help with SuperTux development, you can find more resources in our wiki at https://github.com/SuperTux/supertux/wiki. Please get in touch with us. The fastest way is usually IRC, but please wait if you don’t get an answer immediately. We urgently need more graphic designers and developers for future releases, help in these areas would be really appreciated.

A big thanks to all of our translators who worked very hard to translate the new strings in time.

Source tarballs and builds for Windows (32-bit and 64-bit), OS X/macOS and Linux (via AppImage) are available on the Downloads page, or via GitHub.

with 2017 coming to an end, we’d like to reflect on what’s been happening with SuperTux development in the past year and on our plans for next year.

Nonetheless, there are some bigger changes worth mentioning:

These are the things we’re currently working on (with which we’ve made progress):

However, there are also some things we would like to achieve for which we need help, more or less specifically:

If you haven’t noticed yet: We have released the 2016 Christmas Add-On to the public! So, go and grab it if you haven’t yet!

Furthermore, we want to invite everyone who is interested to an open discussion about plans and ideas for SuperTux during 2018. Feel free to join us next week, on January 7, 2018, either in our IRC channel #supertux on freenode, or using Riot/ Matrix in #supertux:matrix.org. You’re most likely to find some active developers around afternoon and evening in central Europe. Everyone will be welcome, we’re hoping to share our plans and ideas but also we’d like to hear more feedback from the community!

We also want to give a shoutout and big thanks to the many people who support SuperTux. This includes but is not limited to:

Without all of you, SuperTux wouldn’t be where it is today!

The SuperTux Team wishes everyone a happy and successful year 2018!

Gift Package: "Crystal Mine" by RustyBox

To show our appreciation to donors, we’ve been sending out two gift packages since last Christmas. Since we plan on making more of such gift packages in the future, we decided it was a good idea to keep everyone up-to-date about what’s in there.

However, in order to enjoy this extra content, usually provided in the form of an add-on and appropriate installation instructions for the operating systems we support, you will need to donate (via PayPal, since we can’t know your email address when you’re donating Bitcoins). Donations help us finance project-related infrastructure, paying developers or artists, and sending developers to conferences or similar. All donors get access to current, past, and future gift packages.

The current gift package contains the level “Crystal Mine” by RustyBox. It’s the first official level to use the crystal cave tiles and supposed to connect Icy Island with Forest Island in a future release of SuperTux. In addition, it features various other unique elements. 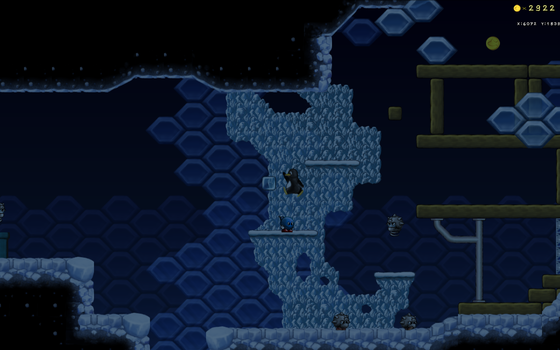 If you have any questions or problems with the donation process, please send an email to team@ this domain.